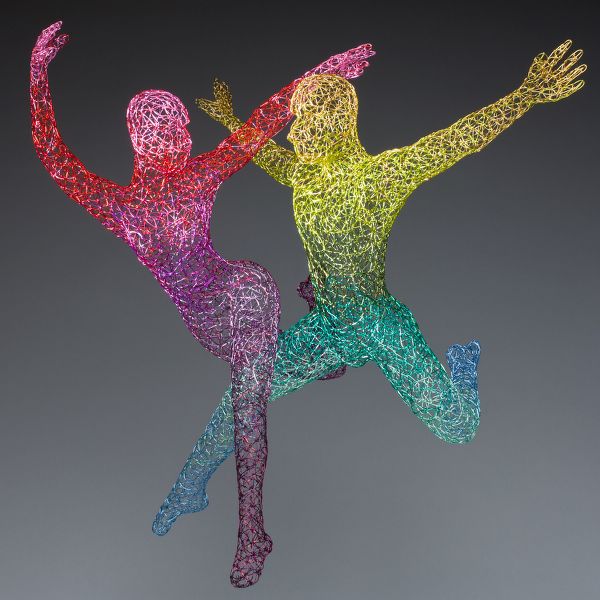 Michael Gard, a highly lauded sculptor from San Francisco, is a featured artist at Belleville’s Art on the Square and is excited to be this year’s artist for the High School Sculpture in the City Program. Michael led Belleville East art students to create 100 two inch sized wire spheres woven around a wax ball to eventually assemble into a larger wire sphere mobile. He uses a technique that is unique to him, where the artist weaves around an original wax sculpture then he later melts out the wax. Michael shares that he created this technique as a seventeen year old art student during his lunch hour. So he is thrilled to work with students who are around the same age that he was when he started sculpting.

This technique has further allowed Gard to create much more complex objects than other methods, in wire. His philosophy is to make a work that appeals almost purely aesthetically. Gard states that this is an unfashionable choice in much of the art world, and much harder to write about than the predominant arresting/creepy/’frisson of meaning’ style. For his subject matter he chooses the human form. He creates a very recognizable shape that can be read by the viewer from any angle, essential for mobiles. He stylizes the figure just to the edge of what viewers consider naturalistic. But, since the piece is essentially seen only in silhouette he has to exaggerate some aspects of the form in order for it to appear naturalistic. He elongates the limbs, cinches the elbows and knees and carves the backbone deep. Since 2008 he has also been adding LED lights to the inside of his figures creating a glimmering light due to the proximity of the light source.

You have Successfully Subscribed!

Cafe on the Square